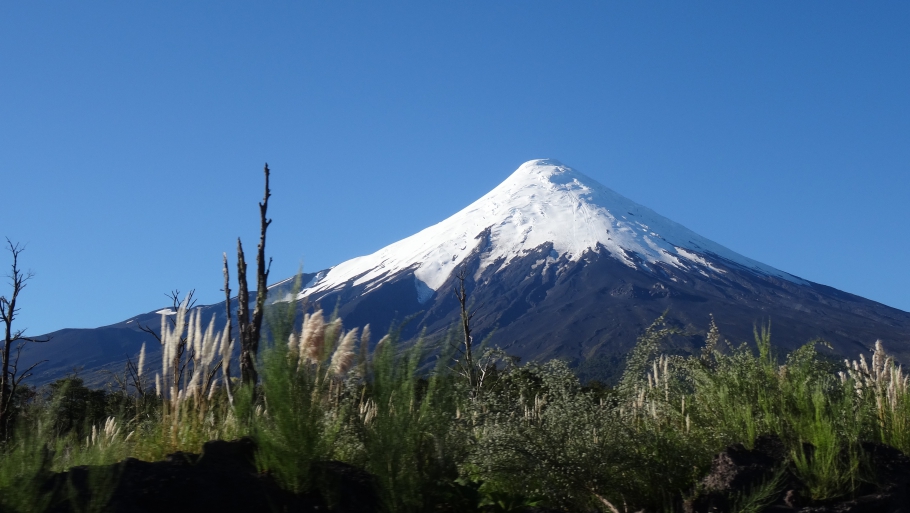 After our trip to Tierra del Fuego I needed some sun. After 2,5 months of the so famous Patagonian weather conditions, mainly wind and rain, I was ready for warmer temperatures. We took the plane from Punta Arenas to Puerto Montt where we rented a car for a couple of days. And back we were on the road which we  had already had cycled a couple of months before.

We stopped at the camp site in Rio Puelo, where we had stopped end of October due to some very bad weather conditions. It proofed to be the same this time, only temperatures where much more comfortable for camping but rain clouds passed by far too often during the day than making a long hike pleasant. So Christian bought a fishing licence and tried his luck with an old rod and joined the crew of other nice guys who also stayed at the campsite for the purpose of fishing. Fly fishing is what this region is famous for and for sure it looked gracious when Matthias, the Swiss guy, swung it’s fishing rod a couple of times and let the end of the rope sink into the water.During our 5-day-stay we excessively used the kitchen of the quincho, ate together with the others from the campsite, visited some nearby attractions and gave a hand on the campsite repairing the water pump and building a bench for the quincho. Also our second stay on the campsite was kind of for free. And finally we stayed until New Year’s eve to celebrate with a bunch of people from Switzerland and Santiago. Pablo, the fisherman, and his son caught some fresh trouts for dinner. A calm but really nice celebration to welcome the new year before heading further to the Chilean paradise for climbers.

La Junta, at the Rio Cochamo, was almost around the corner and was recommended by everybody on the campsite. And finally, when we left Puelo on the 1st of January we were spoiled with plenty of sun. The hike up to the valley was above all very green. Muddy paths and some small canyons formed by the run down water made it’s way through some beautifully thick forest. When we reached the campsite we had a marvellous view on the surrounding mountains which suggested some perfect climbing conditions even to me. The guys went up the nearby mountain in the early morning while I had a long sleep to recover from the cold which I could not get rid off over the past days. The decent down to the car was as beautiful as the ascent and again accompanied by plenty of sun.

A little stop via the small and not very much known Lago Todos Los Santos at the Rio Petrohue before stopping at the Lago Llanquihue for camping. We’ve chosen exactly the same beach where we stayed the first night when we started our cycling tour and reminisced in good old memories. We gazed the sunset again (like the last time) and had a good sleep before heading to Lago Ranco the next day.

And here we were, in the middle of the Chilean holiday season in one of the most popular places in the Lake District. Memories of this place would have been much nicer if not we had a sleepless night on the campsite where our neighbours smoked us in with their barbecue until 4 in the morning of course accompanied by plenty of noise. Also beaches were packed with people and unfortunately that was not what we were looking for. However, the lake is beautiful with some high mountains to the east and some flat highlands to the west.