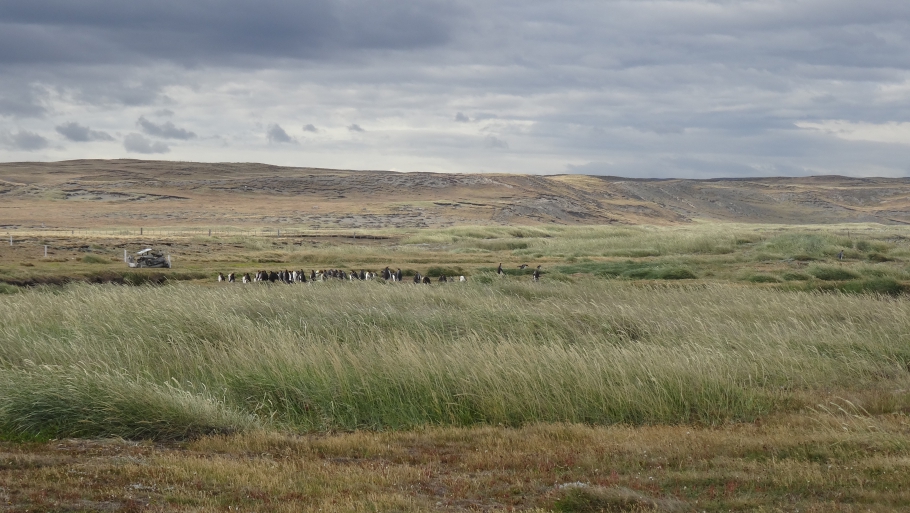 I am a traditional Christmas person. I like the time of candles, biscuits, Christmas Stollen and Gluehwein. I am not really a winter person but I like Christmas time to be cold and snowy. I think we had chosen the best spot for a Christmas time on the southern hemisphere: We travelled Patagonia. It’s been quite windy and cold most of the December month and during our Torres del Paine trip it had been snowing 2 days out of 7. Even today,  the 25th December, I am wearing some tights under my trousers as Tierra del Fuego is really cold and windy.

We’re on our way back. When we took the ferry, it was only yesterday, we had a couple of priorities:

2.) A kitchen to cook some traditional dinner

4.) See king pinguins in the bay 1h away from Porvenir

I think that’s about it for our exquisite taste. Not increasing the tension of guessing how the story ended any further: We failed in a way to obtain on point 1, 2 and partially on point 3 but succeeded in point 4. Not having talked to my family on Christmas made me quite unhappy. The guy who invited us did not have a kitchen or the kitchen he had was not available for us. I think he saw clearly our disappointment but also we did not know what to do with all the food we had bought in Punta Arenas. So he guided us into a kind of container with no heating but at least some light and a bathroom. I would not mind a night in a sleeping bag somewhere in Tierra del Fuego, at the end of the world. And for our usual standard the comfort was fully alright, I would even dare to say it was good. But it was Christmas and when the guy confessed that he did not have a kitchen and that we could eat in a restaurant I think our disappointment increased. What kind of vegetarian food could a restaurant possibly have at the end of the world? Well, it proved to be better than I thought: Cheese empanadas and French fries was not exactly what I dreamed of for a Christmas dinner but it was first of all cheap and also it was not so bad, too. A bit of ketchup and a bit of mayonnaise helped to add a certain taste.

So how did we get into that awkward situation? A guy contacted us via courchsurfing after David posted an offer to cook a German dinner and to exchange some Christmas traditions. Cristian, a Chilean guy roughly our age, did send an e-mail in German and it seemed understandable. I wrote an e-mail back explaining our intention in German and English to avoid any confusion. He claimed himself to speak good English, so I did not bother writing in Spanish. I should have got suspicious when we had him on the phone. Other than “Yes, it’s no problem” and some standard phrases he did not say much. So we went wild in Punta Arenas buying a full Christmas menu for at least 5 people. That was our plan anyway. When we finally arrived at the ferry I had a strange conversation with Cristian: “How do we find you? What colour has your car?” Answer: “Yes, alright. No problem. See you later. Ciao.” End of phone conversation. Thinking about it I am not sure if he does not speak any German or if he actually did not bother about my question.

I mean, I want to put things right. He’s a lovely person who tried to make us happy in any way but it was just not the right timing. Any other day but Christmas would have been absolutely fine. After the first shock and some beers in the restaurant we tried to see the funny side of it, organised a far too expensive trip to see the king penguins the next day (a kind of a Christmas present for us) and invited the guy to have a Jaegermeister with us which Christian, our friend, had purchased in the Zona Franca in Punta Arenas. We played some games of UNO and listened to some Christmas songs.

Next morning we woke up. Cristian had organised somebody else to make the tour with us. Strange enough, it was even more expensive and even earlier than the actual trip. I think for a German mind and for my taste the rescheduling, over caring and changing plans was a bit too much. But as it was too early and we had slept few hours only our resistance was quite low.

Of course we arrived too early, roughly 3 hours. I did not check the opening times and trusted that the guy would know it. We looked a bit puzzled but the driver confidently jumped over the fence, talked to a guy who seemed to live there and they opened together the door to the park. And here they were: lovely king penguins. David counted approximately 100. What funny animals they are. We took plenty of time observing the creatures which were still far smaller than I would have expected them to be. However, they golden colour and the funny way of walking fascinated all 3 of us. On the way back, the driver showed us some gold mines and some quite beautiful parts of this otherwise fairly unspectacular landscape. What made the scenery exciting and beautiful was the light. Far after sunrise the sky was still partially covered in orange and pink colour.

Finally we returned to Punta Arenas after less than 24h. We called a hostel and asked them if it was possible to get a room and if we could use the kitchen. Answer: positive. Arriving in the hostel it turned out that everything was as we had expected it. We started cooking, invited a Chilean girl and a Brazilian guy and enjoyed our Christmas meal on the 25th in the late evening. We shared some traditional home-made Chilian Christmas drink and offered some German Marzipan and the Christmas-Stollen was just waiting in the oven.

By the end of the 25th December we had completed point 1,2,3 and 4 only with a bit more stress than actually planned but with some funny stories to tell.