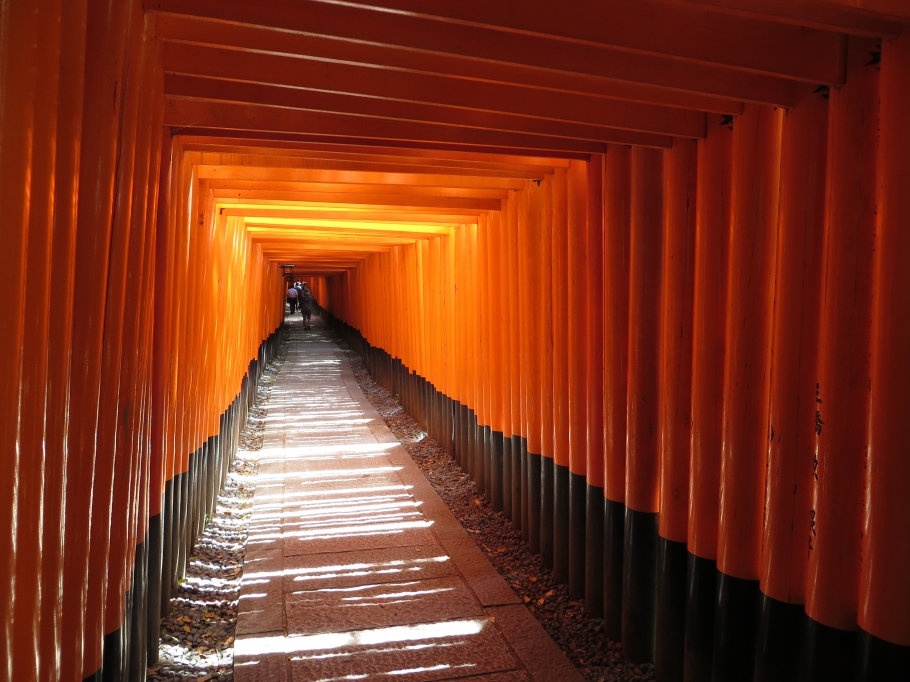 Another must do, we thought. And so did many other tourists during the two days we visited the most traditional city of Japan, the ancient capital with its 1600 temples and shrines which of quite a few belong the the Unesco World Heritage. We decided to discover Kyoto by bicycle and managed to see quite a lot within our short time. That said after the Kiyomizu-dera Temple and the Fushimi Inari Shrine, crowded with Japanese tourists, foreign tourists and many, many school kids, we already had enough. At the latter with its endless bright vermilion-coloured torii gates we walked up to the top of the mountain and then discovered a nice path to return to the entrance with no one around us. As so often the main sight is bursting with people while just a few steps away from it you’re on your own.

We also enjoyed riding along the beautiful philosopher’s road, along the tranquil cycle-paths next to the Kamo River, squeezed through the hordes of people at the Nishiki Market and had a proper sushi experience at Kyoto’s oldest conveyor belt restaurant.

While sitting at the banks of the Kamo river next to many young locals that were talking, laughing, playing music or just enjoying the last sun rays of the day as we did, with local foreigners mixing in and blurring the lines between the languages, we felt like this city was the most western city we had seen in Japan. Yes, many traditional temples and shrines and oh so often you see women dressed in traditional kimonos, but the relaxed atmosphere and the many students changed it all for us. Quite a liveable place!

Two days later I came back from Osaka to meet up with Matt and Lee, two of my ex-colleagues from England who were visiting Kyoto on a business trip. After a restaurant, a bar, lots of chatting, after a noisy karaoke place and more chatting with the very welcoming guys from Kyoto’s Q-Games studio, after many, many more bars with plenty of alcohol involved I fell into my bed in a spaceship like capsule hotel. Very untraditional, but a 100% Japanese experience in a westernised Kyoto.