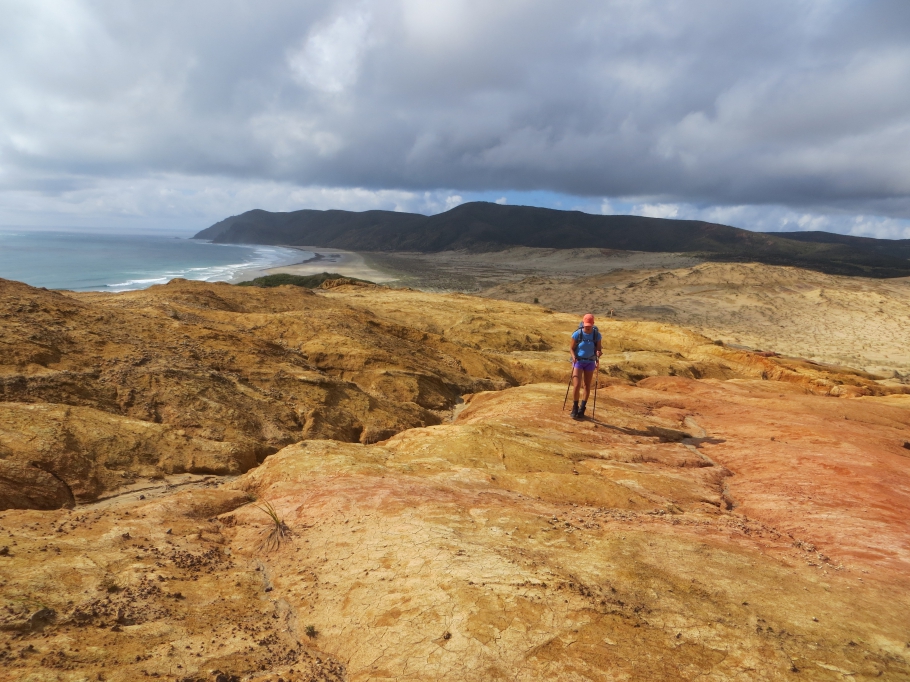 For our last adventure in New Zealand we decided to go somewhere Nicole hadn’t been yet. We decided on New Zealand’s furthest northern region, a 6 hour drive from Auckland, and happened to find a rather unknown hiking trail known as the Te Paki Coastal Track. This 48km walk takes you along the cape of the very top of the North Island and is usually done in 3-4 days but one could easily spend longer there.

It is a stunning track that offers coastline views of deserted beaches (Spirits Bay, Pandora, Te Werahi and Twilight), crystal blue inviting water, wind swept trees, copper colored hills, a shallow stream laden with brown silky sand (Te Paki), and steep golden sand dunes which tourists flock to to ride with a body board that can be hired for NZ$15.

The beauty we found with this track was that for most of the time we were on it, we were the only ones there. We came across 3 people during our walk. There’s something that adds to all the stunning beauty in this location when you are the only ones there to enjoy it. The feeling of seclusion makes it like your own little paradise.

One of the iconic parts of this track is Cape Reinga also known as Te Rerenga Wairua. For the native people of New Zealand, the Maori, this is the most spiritually significant place in New Zealand. A lonely 10m tall lighthouse and an ancient pohutakawa tree mark this special place. It is said that after death, all Maori spirits travel to the pohutukawa tree at Cape Reinga. They descend into the underworld (reinga) by sliding down a root of the tree into the sea below. They travel underwater to the Three Kings Islands where they climb out to the highest point (Ohaua) and say their last goodbyes before returning to the land of their ancestors “Hawaiiki-A-Nui”.

We camped at three locations along the track – Spirits Bay, Tapotupotu and Twilight campsite. Whilst all were picturesque locations with a beach at each of their doorsteps, we would recommend the Pandora and Twilight campsites as these are only accessible by foot which probably contributes to the high possibility that when you visit, you will be the only ones there.  They also have the added bonus of being the two free campsite locations on the track.

Enjoy the photos from the Far North. It is one of, if not the most spectacular locations of New Zealand and a not to be missed destination if you ever decide to visit New Zealand.