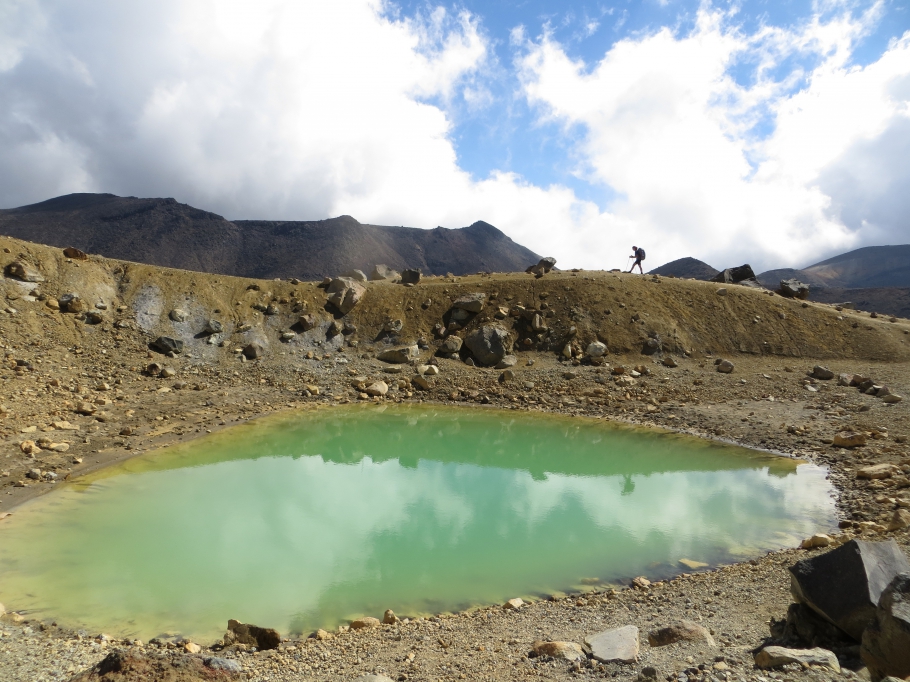 The Tongariro Northern Circuit is the third of the nine Great Walks that Nicole and I did and at the same time our first hike on the north island. It’s pretty much in the center of island in the Tongariro National Park and leads in two to four days around Mount Ngauruhoe. For die-hard Lord of the Rings fans this is not just any mountain, it’s the volcano that was used as Mount Doom, the place in Mordor where Frodo destroys the ring by throwing it into the fiery lava. It’s far from being the only volcano in the region, the whole national park is bursting with active and inactive craters, though the Mount Ngauruhoe has surely the most iconic appearance of them all.
The trek leads through grassy highlands, frozen lava streams, along blue crater lakes and yellow sulphur steams. Almost all of the trek is above the tree line at a height between 1100 and 2287 metres. It’s a very different scenery to all the other Great Walks, making it a welcome alteration after our hikes on the south island.

Two things made this trek quite unforgettable: The first was the glorious sunset we got to see after our first night. We had put our tent close to the Oturere hut a bit away from the others and directly next to a cliff-top. When we woke up around 6.30, the sun had not started to climb the zenith yet, but it was already filling the sky in gorgeous pink light. Then it started to light up Mount Doom (Ngauruhoe) in bright orange, then the surrounding moon-like scenery and then it appeared above a thick layer of cloud that was filling the valley just below our tent – a breathtaking start into the day!

The second thing was the climb of Mount Doom (Ngauruhoe). Unfortunately Nicole felt too exhausted to do the steep ascend, so I walked up with Alex, a French guy that we had met on the track. He was very keen to make it up to the top and told him that he would be Frodo and I would be Sam, even though I wasn’t very much into the Hollywood background of this scenic place. Once we reached the steeper part of the climb, I got a big smile on my face, realising what burden the makers of the films had put onto their die-hard fans: The 600m climb leads mostly over loose, sharp edged volcanic rocks that make you loose half a metre for every metre you try to gain. Every few minutes you have to swerve left and right trying to avoid rocks tumbling down the mountain, probably set loose by some other enthusiastic fans.

Once at the top we got some rare views through the clouds over the surrounding valleys. Yet more interesting was one of the mountain’s two craters, that has an overhanging ring of red volcanic stone at its top. Apparently it’s a well known setting used in many adventurous films and it does live up to it.
The way down promised to be just as hard as the way up, until we started to more or less jump and slide down the steep loose surface, resulting in some weird cowboy walk slash bunny hop which got us down in no time, but filling our boots with plenty of gravel.

As a note to anybody who wants to do the same hike: I can recommend to start the tour in the early morning at Whakapapa Village, walk counter clockwise to Oturere Hut, stay there for the night and have another early start for the Tongariro crossing. That way you avoid walking along with the many people that attempt the Tongariro crossing in one day and have must of the nice hike for yourself. If you go up Mount Ngauruhoe, I suggest staying one night at Mangatepopo Hut, if not, you might as well finish the track the same day at Whakapapa Village.