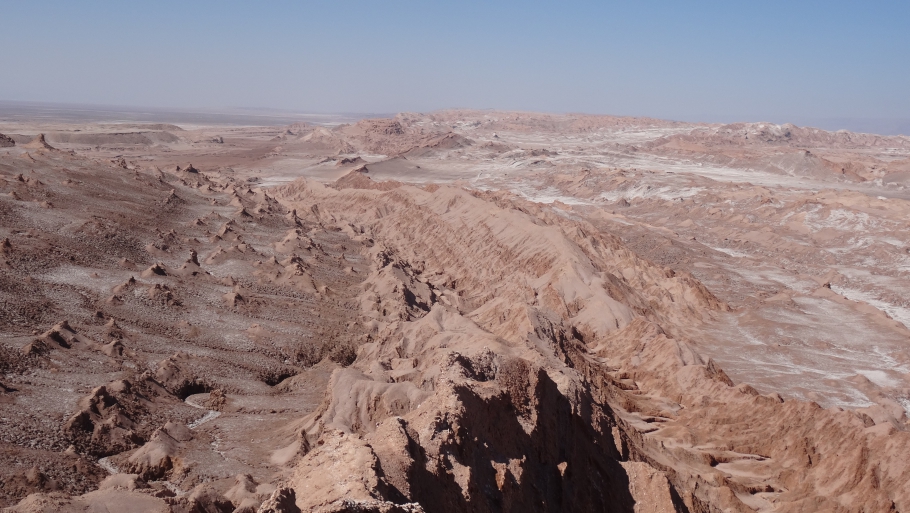 Yes, we were ready to leave Chile. 3 months after we had bought our bikes in Santiago, we were ready to leave the country in which we had spent more or less half of the time of our South America trip.  We tried to squeeze a couple of things in before leaving. It felt that we had not seen everything we should have. Well, the more time we spent talking to people the more places locals had recommended to us. I think that everybody has a different perception of natural beauty and the idea of what not to miss in life. And finally we trusted a Belgium guy who said, that San Pedro de Atacama is a must do and also the crossing to Bolivia’s Uyuni Saltflat. We should not regret it.

We drove through some pretty dreary landscape: dessert, some more dessert and even more dessert. I don’t exaggerate saying that we looked out of the window, sometimes for 1 hour or 2 or even 3 and had not seen the slightest hint of life: not even a dry cactus or bush. This place seemed to keep it’s promise as the driest dessert in the world. Apparently some of the places haven’t seen rain for over 400 years. I had no reason not to believe it. We’ve chosen a 24h journey (15h night bus from La Serena to the not so beautiful town of Calama) and finally to San Pedro. It’s true that San Pedro is quite touristy but it still has it’s charm. Camping is rather dusty, hot and noisy during summer, party people everywhere. It had rained heavily during the last night so that people dried their equipment during the day or had left for a dry hostel. We put up the tent, got organised for the coming days and did some sightseeing in town.

8 o’clock in the morning on the next day we got on our bikes an cycled to the Moon Valley, in Spanish called Valle de la Luna. We arrived before they opened the National Park and avoided the few coins of entrance fee to keep our budget low. Usually people come during evening times when the entire dessert and mountains are tinted into bright sunset colours. The advantage of starting early was that we hardly saw a single soul in the entire place. Beautiful dunes, mountains and impressive geological formations all for ourselves which we excessively enjoyed. A short stop at the Inca site Pulcara de Quitor on the way back. Hiking up to 2500m was hard enough but there was more to come when crossing over to Bolivia.

So that’s where the next story started: Salar de Uyuni, here we come.