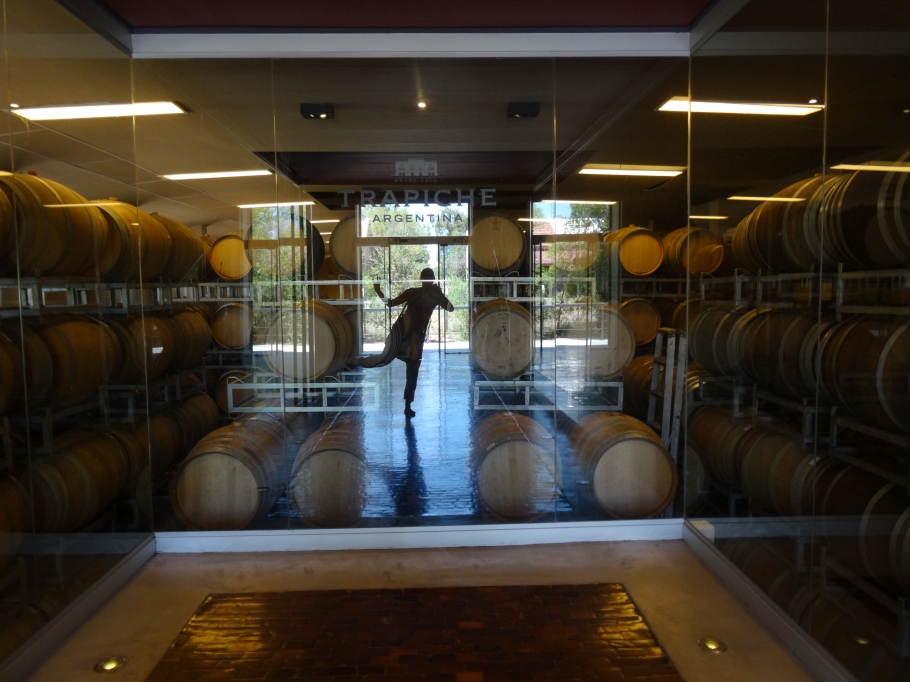 The guys had left to climb a 6000er mountain when I started a different type of activity. The 8-hour long bus trip to Argentina was beautiful and impressive, passing closely by at the Aconcagua, the highest peak outside the Himalaya mountain range and for sure the highest one in the Americas. Technically easy to climb but ridiculously expensive. I was not going to approach the mountain anyway. I had enough of it over the past months. I was up for wine tasting and some relaxing time. When I got out of the bus in Mendoza I checked into a nice hostel close to the city centre. Here I would like to mention that Mendoza is not a particularly beautiful city but it’s a great starting point for a bike & wine tour in Maipu, the homeland of the Malbec grape. So me and 3 British girls who joined me took the bus from Mendoza to Maipu, hopped off it at the bike rental and had some good fun, riding our bikes from one wine yard to another. We already learnt in the hostel how to taste wine properly and how distinguish the taste from oaky and heavy to fruity like pineapple. But during the wine tour we entered a different level of it, watching carefully the colour and texture through the wine glass and half gurgled half drank the wine to figure out the lightest hint of a flavour. At least people were open enough to accept that the wine had a hint of basil for me while they actually thought it had a strong note of cherry. Riding the bike at temperatures above 30 degrees was not as bad as I had thought and the effect of the wine was not that strong either. I learnt that oak barrels in Argentina are imported up to 80% from France and 20% from the United States. Apparently their oak trees, the few they have on the continent, do not give such an intense taste to the wine. Well, I better stop throwing in some random statistics. After the wine tour there was not much left in the area as I did not want to pay the high entrance fee of Aconcagua National Park. Above all, there is only one main trail to the peak and I did not have a tent with me anyway to stay for longer. So I decided to go back to Santiago to enjoy a bit of cultural life in the capital of Chile.

And that’s what I did. I visited 1 or 2 museums per day. I recommend the Museum of History and Human Rights and the Pre-Columbian Museum. I like art and therefore I was a bit disappointed by the few displays. I guess I am a bit spoiled by our gigantic European museums.

I also had a stroll through some neighbourhoods of Santiago, a short stop or two at the amazing “Emporio La Rosa” ice cream shop, I went to some great and free classical concerts and did some (window) shopping. It goes without saying that I only bought required, inexpensive things which were able to fit into my bag, of course. Good god am I brilliant to squeeze my belongings into my 45l rucksack. And so I spent 4 days in Santiago without the guys and enjoyed the freedom of not negotiating with somebody what to do next.