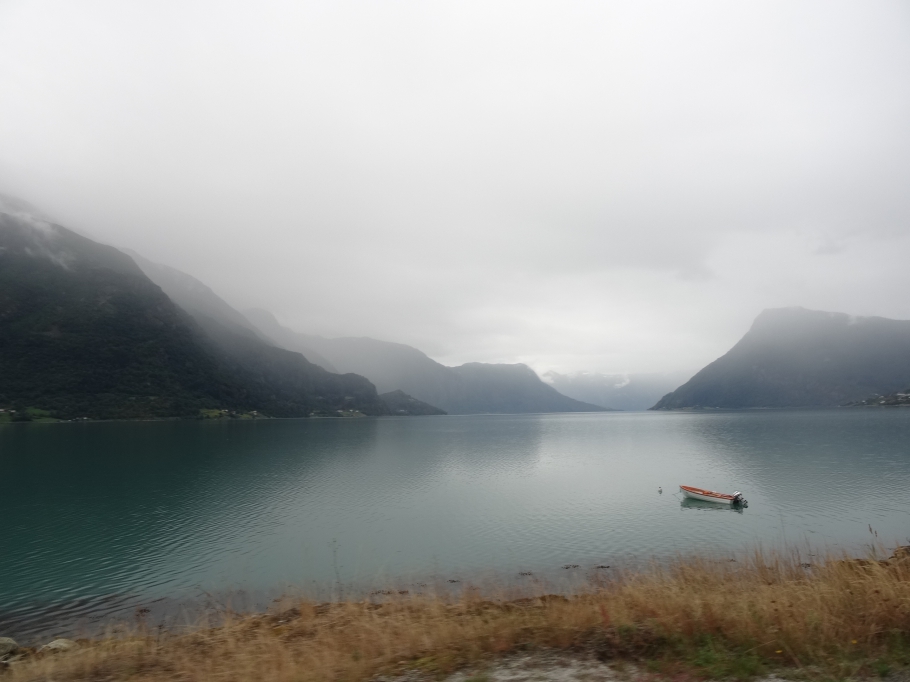 We’ re back on the road making the car counting a few more kilometres. After having taken the ferry at Hirtshals, Denmark to arrive in the early afternoon in Langesund, Norway we spent our first 4 nights in David’s tent. It’s the cheapest and most beautiful way to enjoy Norway’s nature. The so called ” Allemannsretten” allows anybody to camp on any land in Norway as long as it is at least 150m away from a dwelling and preferable out of sight of the next house. This 1000-year-old law makes it quite easy for people like us to travel on a low budget in this fairly expensive country. However, it came with the downside that I did not have a proper shower in 4 days or so. A refreshing jump into the lake or a quick wash in an ice cold river in the morning was almost always guaranteed though. Norway is so rich of water of all types: ponds, lakes, rivers, fjords, waterfalls and glaciers. It was what impressed me the most I think.
Arriving in Langesund, we drove to Kongsberg where we stayed the first night at a lake outside the town. A nice spot and almost all for us. We left the next morning for Sogndal, the town of the Sognefjord, Norways longest fjord with more than 170km. We passed Geilo, a very touristic skiing town and well located with promising hikes. Unfortunately we did not have the time to stop for a quick walk as we still had plenty of kilometers ahead of us that day. There is a well known cycling path from Haugastol or Myrdal to Flom which takes you between 1 or 2 days. Maybe we’ll come back one summer and leave the car at home, taking the ferry and the night train to go up the north and cycle down the Norwegian countryside. This summer, we’ve planned a road trip and that’s what it was.
From Aurland we took a National Scenic Route to Laendal, the so called Eventyrvegen. We could not help ourselves stopping at every possibility to take pictures. Arriving around Sogndal we struggled to find a suitable place to put our tent up. There were either too many houses nearby, too steep mountains or too wet grasslands. Around 9pm we finally found  a spot between the road (nestled at a mountain) and the Vejtastrondvatneta, a quite big lake off the Sognefjorden. Very idyllic place just a bit too close to the road.
When we set off the following day we took the next scenic route to Lom, the Sognefellsvegen led us through 2 national parks: the famous Jotunheimen Nasjonalpark in the east and the Jostedalsbreen Nasjonalpark in the west. We could not help but stop at every possibility to have a quick walk and take some pictures. The mix of clouds and even a bit of rain created a rough and beautiful atmosphere. Of course with a bit of sun the glaciers and lakes would have been set in an icy blue-ish and green-ish colour but we did not have the time to stay until the weather would have changed.
Behind Lom we quit the Sognefjellsvegen to drive towards the famous Geiranger-Trollstigen scenic route. A beautiful view into the valley appeared and we caught some great views of 3 majestic waterfalls which rushed down the steep mountains on both sides of the gorge towards the Romsdalsfjorden.
We finally arrived in Molde where we searched and found a nice spot for our tent on a tiny peninsula not far away from Bud, where our next scenic route would start the following day.
The Atlantic scenic route goes across the west coast from Molde to Kristiansund and is apparently one of the most impressive routes in the world. I think this is especially the case during autumn storms when big waves flood the roads. The roadworks had to stand 12 storm until it’s completion in 1989. For my taste a bit less impressive than the mountain roads but the sea was also surprisingly calm.
When we arrived at the end of the Atlantic route we took the shortest way to Trondheim where we picked up my mum from the airport.
Oh, one thing I loved so much was that we have never used any torch during the nights in our tent. Up to midnight it was bright enough that one would think that it can’t be later than 9pm. Same thing in the morning: at 4am when I woke up in the tent in full panic that we had slept in again. In fact, I even haven’t seen once a fully dark sky.
There are plenty of things to see and experience in Norway but somehow all of them give you the feeling of pure nature. Not having been to too many European countries I still felt that it was quite unique in Europe.