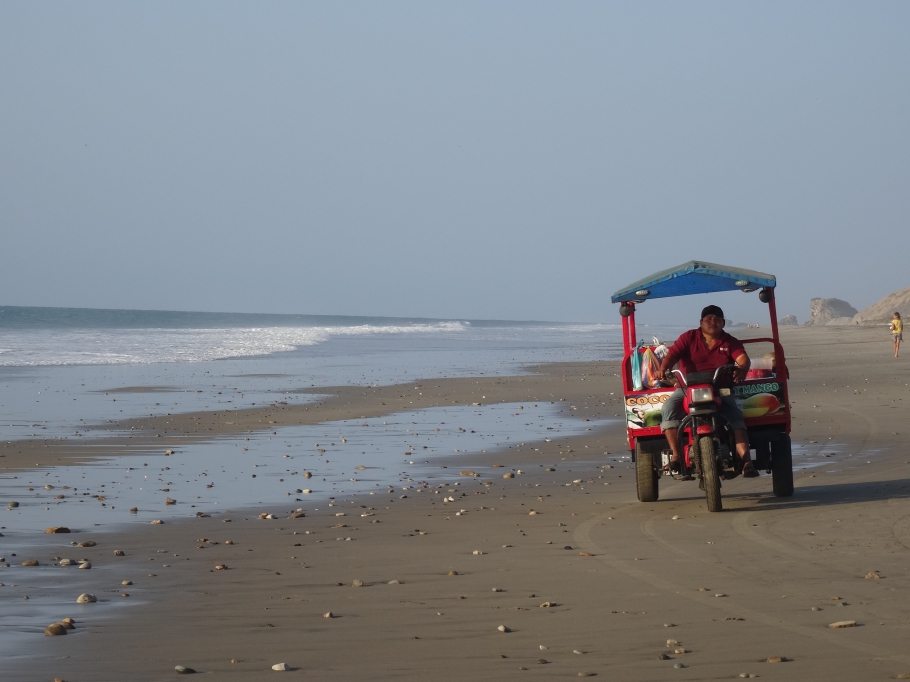 David and I have been travelling together since end of September which makes life a bit easier and some exciting time together is ahead of us.
We decided to spend our first few weeks together in Villa Kite at Santa Marianita beach close to Manta, where we took 2 weeks of Spanish lessons. The hotel was perfect: we got a special price as we booked in for 2 weeks, rented kite material and I took kite lessons on top of it. For Ecuador, it might have been quite posh but compared to prices one would usually pay in Europe it was quite a bargain. And all I can say: it was a really nice crew and the manager did all what he could to make us happy. Great spot on top of it: the beach was just in front of our hotel and we could hear nothing else but the sound of the waves. Unfortunately, as in so many other places of Ecuador, the hotel’s kitchen hardly served any vegetarian food but I already knew that the concept of a vegetarian diet is not always to South Americans . I could not blame the chef who was mainly cooking for Spanish guests.

Dorit learns Kite-surfing.
Well I was almost on the board and my final conclusion of my 10 hours private training: David did a great job to explain me the kite theory (power zones: where does the wind comes from, where do I want to keep the kite) and to practice with a mini kite. Louis, my trainer, did a great job, too. I do not like water very much and I still don’t do but he was gentle enough to convince me to resist some big waves (David would say they were quite small though) and he got me going out in the water where I made my way through a couple of nasty jellyfish during my body dragging exercise but had a lot of fun, too. I know quite a bit about the equipment now, I am able to control the kite and body dragging is actually good fun. Losing my board is still an annoying event as I still have to work a lot to recover it. I did my first water start but only to the left side. The right side will have to come later. What I still see as a real challenge: manage board and kite the same time. I still don’t like waves but I am keen to practice under some slightly simpler conditions. Next lagoon we stop by I’ll give it another try. Also I got quite well motivated by the Kite Fest, a kite surf competition, which was held during the weekend of our stay next to our hotel. Great weather, nice atmosphere and it all looked so easy also I fully understood that it’s still a long way to go. So yes, guess David is already checking which other spots are suitable for his and my level to give it another try.

Hola, como estas?
The initial idea of our trip, however, was to learn Spanish. Therefore we spent every morning in a school where we enjoyed some private lessons during the first week and a group lesson with another guy the second week. First week was great and it really helped to get a good understanding of the language even though we are still missing a lot of words to actually communicate.
Getting to school was a daily adventure: We tried out the so called camionetta, a white pick-up with an extension on it’s loading space to transfer a couple of additional people. They seem to be the equivalent to buses which apparently do not exist. During rush hour we had to wait 2 or 3 pick-ups before getting a space to hop-on to the back of the car. This was a 40 to 60 minute waiting challenge. It was however quite cheap: $1 per person. A more convenient way was to share the taxi with a Dutch couple who stayed in the hostel next door. For $2 per person we conveniently had breakfast and set off to school perfectly on time as the driver’s punctuality was formidable, one would think that he could have been German.
A more adventurous way was hitch hiking. One day we got a lift from a lady racing with us on the loading  space of her pick-up to Manta. Another day David was jumping behind the steering wheel to drive for a fully drunk, young Ecuadorian who admired him and his driving style during the 20 minute ride. Poor David who tried to concentrate on the road while the guy tried to feed him with crisps and serve him some beer, turned the music on and tried to sing to Lady Gaga. Also it’s so much harder to speak Spanish with a person who has difficulties to articulate even in his mother tongue. Well, great driving of David for his first time in South America and the hitch hiking is always for free.
After 2 weeks in Manta our Spanish is still quite poor but we know the basics and now it’s time to apply it. Most important thing: our daily 4h lesson was very good fun and our teacher was just nice.

So next stop will be Lima to where we will stay 2 nights to stretch our legs after a first 28h bus ride before getting back on the bus for another 50 or 55 hours to Santiago de Chile.