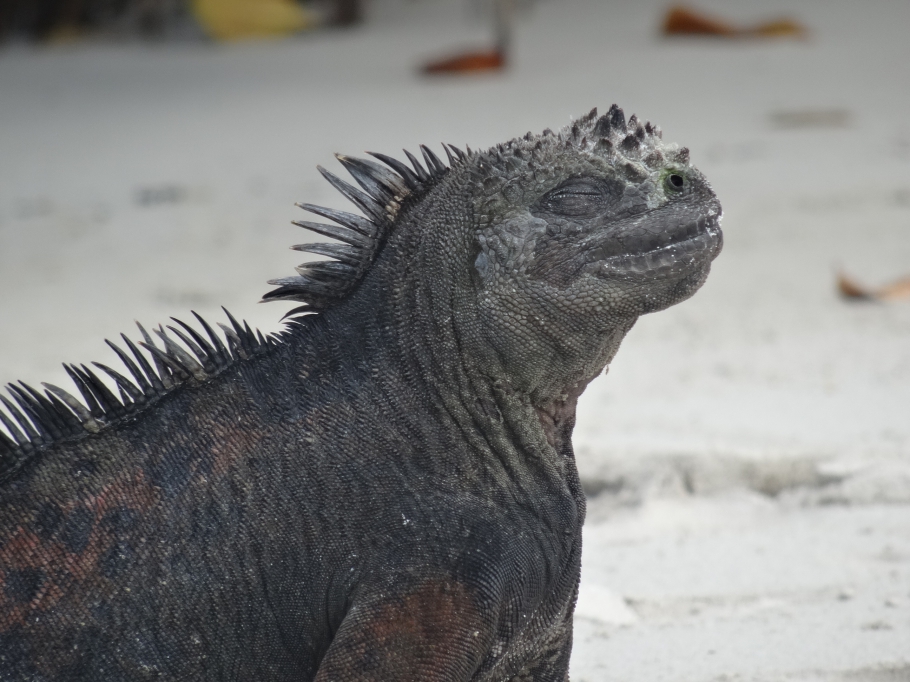 On my arrival around 11am on a late September day it was very cloudy and I thought that this must be possibly what they call winter on Galapagos island. But it cleared up during the day and afternoon was fully sunny. I realised later that this is the usual way the weather behaves during winter season. I landed on the island of Baltra, which hosted a former American Air base of the US Army and which is well connected to Stanta Cruz island, the busiest and most touristic one of the islands.
From the airport to Puerto Ayora it is a 1,5h ride by bus and boat. Saying this, going to town did take much longer as the bus was waiting for another boat and not moving for about 30 minutes. That’s the way it is on the island I guess but same time it’s the cheapest way: 1 dollar for the boat from Baltra to Santa Cruz and 2 dollars for the bus from the ferry to Puerto Ayora. A taxi would cost around 10 to 12 dollar. When I was in town I just dropped my luggage at the hotel and went off to see the Tortuga Bay. Lucky enough, arriving after a 40 min walk I saw an iguana making its way down the beach. Amazed by it’s size and only looking around me to see this beautiful beach I was already convinced that I took the right decision to come to the Galapagos islands.

Next morning I headed back to the airport to meet my group for the cruise. They were pretty much the same age as me and I was slightly relieved about it. Well, being on a budget tour also added a part to it. We went on board and moved into our rooms. My bed had an amazing view over the sea and even though it’s a bit scary to sleep on the upper part of the bunk bed I so love the view and the motion. In the afternoon our first activity was snokeling. Having only snokeled in Vietnam which was really not impressive, I was just amazed by the nature I found under water. I had 2 small sharks overtaking me, had a sealion having fun swimming around me and I was swimming in a swarm of fish with amazing colours. Due to the Humboldt stream the water temperature was fairly cold but with a wet suite I only started to shiver after around 1 hour. After our snorkeling session we headed to Puerte Ayora and the sea got rougher and rougher. We had a couple of people on board who got sea sick and I had to keep in a horizontal position, preferably in bed, to keep my stomach under control. After 2 hours we reached the harbour of Puerto Ayora. So back I was. But to be honest it was far nicer to stay on a boat than in a hostel.
Morning program was the Charles Darwin Tortoise Breeding Center. It’s a rather sad place to see tortoises in captivity. Even though the idea is to raise them for a couple of months or years in order to increase the survival rate of baby tortoises, I have seen turtels far too old for the breeding station. Lunch was as usual on the boat and so far I was happy with my private room. This was changed on day 2 when I started sharing my room with Freddy, a young British who, despite his young age, had some quite interesting things to tell from all his journeys. The afternoon activity was a trip to Santa Cruz highlands to see tortoises in free nature. And it was true that being close to such a giant reptile was an indescribable experience. These animals are generally speaking very slow but quite sublime the same time. It was a pleasure to enter into a staring contest with them and obviously lose.

The evening was easily spent with drinking Cana (South American rum) and dancing Latin American dances in the harbor of Puerto Ayora. Even though I am not a big fan of it, and neither were the others, we all danced and I believe all of us had good fun. Having a little jump into the water before going to bed just before 1am freshed me up a bit. We set off at around 3am to go to the next destination. The noise of the engine was pretty strong and the waves did prevent me from having a proper night, rolling from one site to another. Still, I was lucky enough that I did not have to fight with sea sickness like some other people on the boat.
The third day started off promisingly. I saw a couple of sharks just when I woke up and looked out the little window next to my bed. We set over to the little island close to Santa Fe where we went off board to see sealions and iguanas. It was a full success and even more than that. The landscape was just so different to what I have seen before. Red-ish plants and bushes inhabited the island, apparently in their winter colours. From time to time I could see one of the famous cactus trees and of course wherever we walked we could see sealions and iguanas. We watched the breeding process of seagulls and a sealion caring for its 1 day old baby. It was such a different experience to simply walk through an island and to feel that we are the tolerated animals on their island and not the other way around. During another rough 2h trip to Santa Fe island most of the passengers stayed in their cabins to catch up with sleep from the night before and also to avoid sea sickness. After an amazing lunch (the chef really produced miracles in his kitchen) we started the second activity of the day: another snokeling adventure where we saw sea turtels and plenty of little fish.
And for another time we set off for another rough night to Isla San Cristobal at around 8pm. We were told that it might be better to stay in our beds to avoid sea sickness and it was worth it. The boat was going from the right to the left to the right and at some point I even did some small jumps in my bed. I did not take any sea sickness pills but had not problem to support the constant movements of the boat. Freddy, with who I shared the room, did fall off the bed once and I even had to keep laying on my back arms and legs stetched out to prevent falling off my cosy bunk bed. We arrived at the north-easternmost point of the island by 4am I believe. That was when the engine stopped, silence in my ears, and the boat was only softly moving me into some good sleep. Perfect conditions to catch some 3h decent sleep before the bell rang for breakfast at around 7am .

The 4th day started with a beautiful hike over the highlands of San Cristobal. We were able to observe breeding Red Footed Boobies, Finches and black Iguanas. The landscape was again unique, mainly volcanic stone and few trees in which birds build their nests. Afternoon activity was as usual snorkeling: penty of starfish, swimming with turtles and we saw a couple of skate fish. In the afternoon we went to Kicker’s Rock, an impressive rock formation just before the coast line of San Cristobal island. The 2nd snokeling session of the day was a bit more difficult: strong current, fairly high waves and few fish could be seen due to bad visibility. Our hope was to see hammer sharkes but instead we’ve seen plenty of sea turtles. One was swimming towards me as if it was curious what creature I was. An amazing experience to have these animals so close to me in their natural environment. In the evening we spent a couple of hours on the island to have a drink in the capital of the Galapagos islands. San Cristobal is a sleepy town slightly smaller than Puerto Ayora. It’s possibly the nicer island if you want to experience some local life. I have not been to Isla Isabella but from what I have heard it’s absolutely worth paying a visit to that island too. Well, if it does not exceeds a traveller’s budget, it’s definitely worth spending 2 or more weeks on Galapagos islands.
During our last night the boat kept in the harbour of San Cristobal where I was dandled into a deep sleep by the boat. A last snorkeling session to see marine iguanas before we left the boat to head back to Puerto Ayora. I stayed one more night in town walking again to Tortuga Bay where I watched sunbathing giant iguanas, mangrove forrests and a nice beach for swimming.
Well, and that’s when one week trip to Galapagos had ended. Thanks to all the people telling me it’s worth it going. A $1000 very well spent and for Galapagos islands a bargain.

So yes, maybe some comments on the costs of my stay as I struggled up to the end with the question whether I should make the trip or not. I booked my flight separately and I also found a last minute cruise in Quito. I think most of the people on board payed around $1500 or more, flight included. I found a very cheap flight to Baltra airport (GPS) from Quito and back to Guayaquil costing me $300. Usually they are at $400 easily. I think flights are again a bit cheaper from Guayaquil and back. For a 5-day cruise between the islands of Santa Cruz and Sant Cristobal I payed $660, which was kind of a very goodd deal as normal price is rather around $1000. If you go off season (September to November) you could possibly get it a bit cheaper in Porto Ayora. I should say, that the prices I mentioned are already for budget tours. A more comfortble tour rather rather costs $2000-$3000. Also seeing all the islands (and I am sad that I have not seen Isabella island) the tour should take at least 8 to 10 days. Again, it will increase the budget again. Also snorkeling equipment and wetsuites are usually not included. This costs $20-40 extra. So it’s better to your own stuff if you have to save some more money. I also stayed a couple of days more on the island of Santa Cuz and you can easily count in $15-$30 for a hostel and depending on where you want to eat an open budget of between $5-$35. One important fact is that you have to pay entrance fees to the national park of the Galapagos Islands. Tourists pay $100 plus a $10 airport fees on the mainland. Don’t forget to check this on your airport of departure (they tend to forget to tell you). So all together I have spend around $1300 (1000EUR) for a week but I am 100% sure it was worth it and I am glad that have easily ved up a 50% of the usual costs.

And about the boat: I did stay on the “King of the seas”. Capacity of the boat was 12 people and I have seen other boats (mainly with older passengers on it) for 50 or 70 people; standard is 16-20 though. The boat was very basic and as I travelled on my own and had to share my cabin. Having seen the boat I would have never assumed that there is space for so many people plus the crew. Cabins have bunk beds and a very simple bath room, all a bit old but clean. However, I liked the charme of the boat and the crew was very much fun. And as most of the activities were either on the island or in the water, I finally did not spend too much time in my little cabin but rather on the sun deck of the boat.