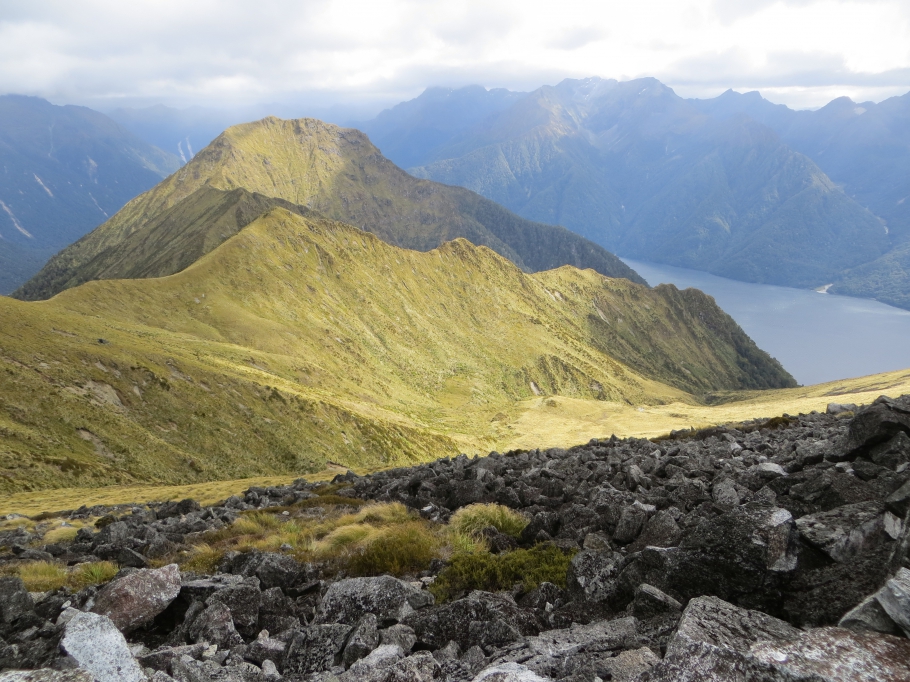 The next hike that Nicole and I did after the excellent Routeburn Track was the Kepler Track south of Te Anau. Before the start I thought that it could hardly beat the Routeburn Track. And it didn’t beat it, but it was just as spectacular in its own way. It starts off in the woods next to the lake and our first campsite was directly at a lonely beach. Then it climbs through beech forests covered with fern and moss up to the peak of Mount Luxmore.

In those forests we met a curious and playful Kea (a green mountain parrot) that started removing bigger pebbles from the path, probably trying to impress us and longing for bread.
After Mount Luxmore the path follows the ridge of several adjacent peaks for about 5 hours with stunning views to both sides until it drops back into the valley and down to the next campsite. On those ridges we got surprised by impressively strong gusts of up to 80 km/h that tried to blow us off the mountain on numerous occasions, but luckily never succeeded. It made it quite an adventure though.

Just as we arrived at the second campsite, the rain started pouring down and wouldn’t stop for hours and hours. We built up our tent under a roof while others tried to find shelter under the kitchen tables of the camp site. The next day the weather turned around 10am and we had a long, long but very enjoyable walk through endless beech forests until reaching a freedom camping spot at Lake Manapouri.

The last day the path continued in the forests until reaching a car park where we gratefully met an older couple that took us back to Te Anau.