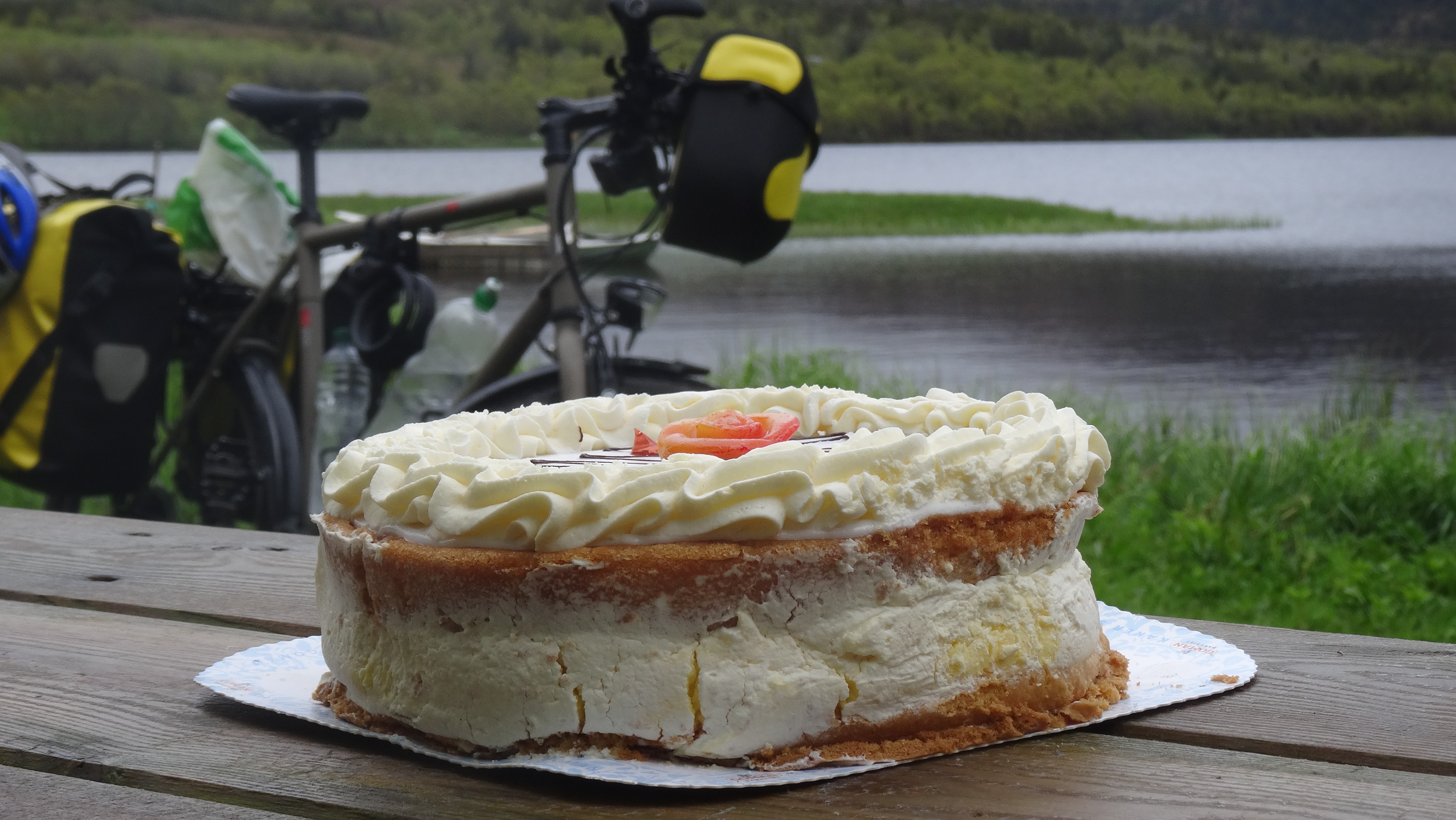 According to a report of the worldbank from 2014, Norway and Switzerland are the two most expensive economies in the world. That doesn’t make Norway the ideal travel country, does it? Food prices are high, alcohol and cigarettes heavily surtaxed, petrol prices are the highest in Europe and there’s an extensive toll system in place on the major roads of southern and central Norway. Of course the latter doesn’t apply to cyclists. Neither did we pay any money for accommodation, since we relied on the Allemansretter, the Scandinavian law that allows you to put up your tent nearly anywhere. Additionally we used a bit of couchsurfing and a similar network for cyclists (warmshowers.org) to enjoy the comfort of a bed from time to time. Since we traveled along the coast and the fjords we had to pay for a few ferries, but fortunately most of them don’t charge extra for bicycles, some are even free of charge. What remains are the expenses for food.

There are plenty of supermarkets in Norway and usually every little town offers you a choice of a few different ones. The cheapest is certainly Rema 1000 and there is no reason to avoid them based on the quality of their products. If you want to combine a visit to the supermarket with the use of free Wi-Fi, then check out Kiwi which is almost as cheap as Rema. Also most coop supermarkets offer free Wi-Fi, but they are probably the most expensive chain in Norway. In both of these you will usually also find tab water near the can return machines and often a little sitting area near the entrance. Another source of free Wi-Fi are the little magazine and snack shops called Narvesen.

Now the headline of this article says “free travel” and you might wonder how this would be possible. I kept asking myself if it was a good idea to put this onto my blog as I feel that some people might want to judge me on this, but I have decided that it’s an interesting story and an important topic. So here it comes.

Straight from the start when Simon and I left Berlin, we decided that we would limit our expenses and try to travel cheap. For Simon the reason was that he is starting to study this September and naturally does not have a lot of money to spend. I on the other hand have the money, but I felt like I had already spent enough in the last 15 months of travel. It also felt wrong to keep spending so much while Dorit was working hard back in France.
So this meant that we would usually buy cheap food from the supermarkets and cook ourselves in the evenings. Nonetheless, coming from Germany to Denmark, to Sweden and finally to Norway we saw our expenses for food rising and rising. This probably led to the idea of collecting returnable cans and bottles which I blogged about a while ago. But it became a time-consuming task and a tough one in the bad weather we had in Norway.
By the time that we arrived in Trondheim we couldn’t face the potato salad anymore, we were longing for some variety. And so it was the perfect moment when our host in Trondheim introduced us to dumpster diving. There are various names for it like garbage picking, skipping or “containern” in German, but the idea is all the same: you look for food that has been thrown away, in our case exclusively in the big garbage containers of supermarkets. Many people do it because they are poor, others are politically motivated (see freeganism), following an anti-consumerist ideology and trying to reduce their ecological footprint. In any case it’s devastating to see how much good food ends up being thrown away only because it doesn’t look as fresh as the consumers want it to be or because the supermarket can’t sell it anymore due to a (nearly) expired shelf life.
During my 6 days in Trondheim I went dumpster diving three times and compared to the previous weeks we were eating like kings. So much fresh fruit, vegetables, bread, pastries, sweets, even dairy products, juice, etc., it was a feast. Bananas from Ecuador at their best, avocados from Chile that just became soft enough to be eaten. Fresh tasty bread baked in the afternoon, thrown away in the evening.
We stocked up for the next days and decided to try the following: we would not spend any more money on food until the end of our trip, in total 7 weeks. We would take from the dumpsters and buy everything that we couldn’t find with the money from can and bottle returns. To our own surprise it worked and it wasn’t even hard to accomplish!

Usually there’s a large blue container in the backyard of the supermarkets. Sometimes it’s locked, but usually it’s not. Vegetables and fruit are from time to time in mid sized bins or even in the size of normal household bins. We usually went there after the opening hours but if the dumpster was out of sight even during the day. If you get seen, it feels a bit weird since you are effectively searching dumpsters, but you won’t be running into problems. In Germany you could get convicted for it, but in Norway it’s not possible after all.
We had some magic moments while dumpster diving like that one time in Trondheim where we pulled out 16 x 250g chocolate bars. Or the other time where we found a birthday cake plus 30 vanilla cream buns. Needles to say that the latter only lasted two days…

Did we do a good thing? I’m not entirely sure. At least it didn’t feel wrong and I don’t think we harmed anybody, neither the supermarkets, nor the country. In any case it’s important to raise awareness for the issue.
In France a law was passed two months ago that forces the supermarkets to give their food to charities instead of throwing it away. There’s hope that the same principles will eventually be applied in other European countries.