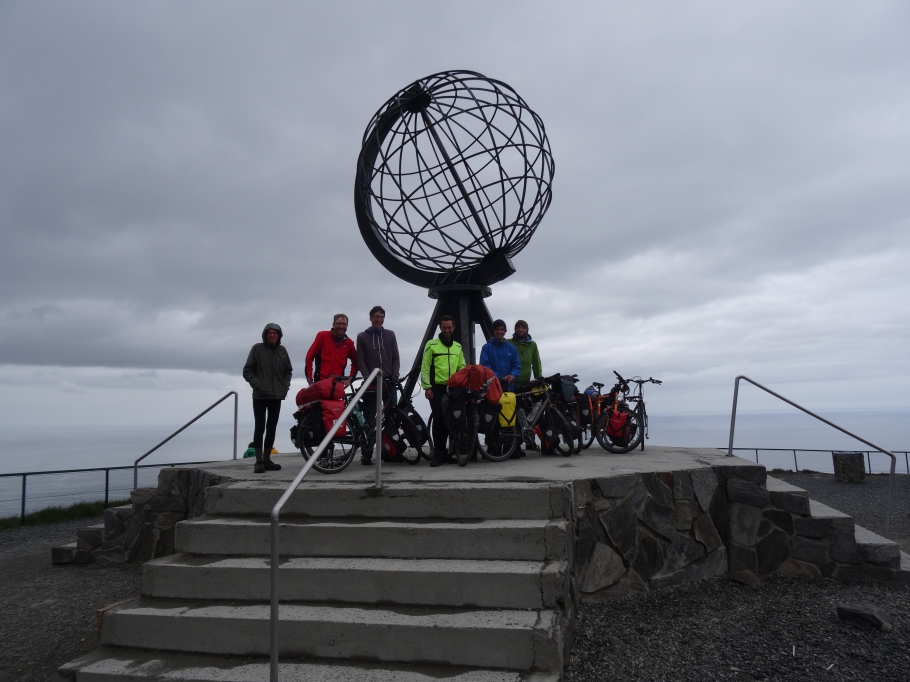 On June 28th we reached the North Cape at about 3pm. Do I hear a little fanfare? And guess what, it was … drum roll … raining! Everything else would have been strange anyway, so I try not to complain anymore.
We had done the stretch from Alta to the North Cape (242km) in only two days, which we had not planned, but after a full day rest in Alta with huge amounts of food, it felt pretty easy. Even the North Cape tunnel, which seems to be quite an obstacle for many cyclists, turned out less difficult than we thought. Going down to -212 metres and back to 0 over a length of 6.8 kilometres, it features a very chilly downhill part and a long, monotone and sweaty uphill part, but we had done much more challenging uphill sections in the centre of Norway. I guess the extra motivation, seeing the target in reach, helped a lot.

At the North Cape there is a big visitor centre and it normally charges about €30. Luckily they let touring cyclists in for free which is a nice reward. And naturally we met more touring cyclists here than anywhere else in our trip. I think we were 8 in total and everybody was keen on hearing how the others had managed so far and what their adventures had been. We even made a group photo at the well known North Cape globe.

It was pretty cold up at the cape, but we could sit inside a big heated hall, use the free internet and enjoy the view over the hordes of visitors arriving all day long. The peak hour is around midnight when busloads of tourists flood in to see the midnight sun, even in rainy and stormy conditions where one can only guess its theoretical position. There’s also a little museum, a panoramic cinema that shows the cape in good weather and in all 4 seasons, a restaurant (not affordable) and a little bar. We put up our tents under the restaurant to get some shelter and tourists came by to inspect our equipment all night long as if it was up for sale.

The area around the North Cape features some pretty scenery, but it’s not really spectacular and one wouldn’t travel that far to see it. As for most, our point was to reach the northernmost point of Europe and doing so by bicycle was quite a challenge. A number of times I had thought about aborting out mission but in the end I was glad I had pushed through.