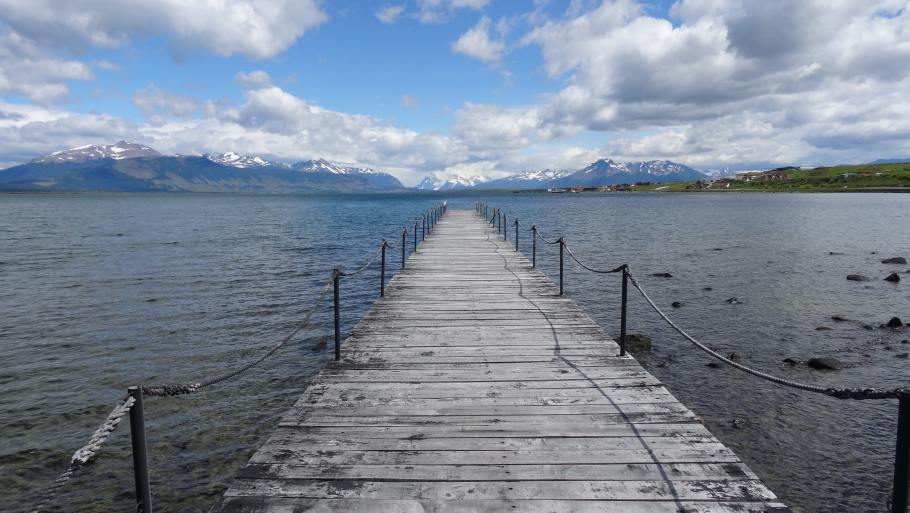 Yes, our initial idea was to cycle to Punta Arenas. For which reason? No particular one other than our friend arrived in Punta Arenas. So why did we stop in Puerto Natales? It’s closer to Torres del Paine National Park and the hike was the next thing we had planned anyway. The road to Punta Arenas was said to be quite boring. 200 km of flat land with plenty of wind and rain. It did not sound very appealing to us. And finally David had contacted several hostels in both towns to sell our bikes and the only people who answered were from Puerto Natales. So why not simply trying our luck over there to close the cycling chapter.

The road from El Chalten to the pink ‘cyclist refuge’ on the way to El Calafate was easy enough, thanks to a lot of tail wind. A couple of people warned us about a big storm with high wind speeds of up to 100km/h over the next days. We pushed further to do as many kilometres as possible to avoid being in the Argentinian pampas where there would not be much of shelter from the wind. Even though David’s tent is pretty good, I doubted that it would survive such wind speeds. Also we estimated the days of cycling to the next town and realised that we were quite short on water. It was not that evident anymore to find easily some water sources and we surely underestimated this problem.

During lunch break we took the decision that if there was somebody who would give us a lift through the pampas of Argentina we would take advantage of it. The roles were quickly advised: Dorit stops the cars and David prepares Sandwiches. And yes, after a couple of passing cars a white transporter stopped and the guy said, that there was no problem to take us and the bikes close to Cerro Castillo, the capital of Torres del Paine region. Indeed we drove through some dry and at some point boring landscape. But maybe we would regret the hitch hike as the end of our cycling trip was in sight and I felt like I should have enjoyed this hard and windy part of the road.

Well, the driver dropped us off close to the Chilean border and we cycled the last 14km to Cerro Castillo, fighting against some pretty strong head winds. We passed the Chilean boarder and appreciated the change of nature: green hills, rivers, lakes and some snow topped mountains in the far back. I took a deep breath and enjoyed the variety of landscape.

After a relaxing night in a hospedaje, we started our last day of cycling: beautiful mountains, glaciers in the distance, lakes and rivers, a blue fjord and some pushing tail winds made our last ride an easy and enjoyable journey. I almost doubted our decision to sell the bikes. I loved the freedom and independence which came with it. I did not like all the rain and the cold but I loved the days where we cycled through beautiful landscape. I so enjoyed the evenings, where we sat outside our tent to cook our evening dinner and then snuggled into our sleeping bags. I struggled to get out of my sleeping bag when temperatures dropped below 7 degrees. But finally it all seemed like a small struggle during a long journey with a lot of beautiful moments.

Still, arriving in Puerto Natales by bike was a great moment of victory. I was happy to get off the bike, took a picture of the “Welcome in Puerto Natales” sign and tried to imagine how it would be without bike.

And out of a sudden our bike trip had ended. There was only one thing left: selling the bikes.Without much loss we sold almost everything: bikes, panniers, helmets, spare parts and even our chocolate flavoured water bottles.

How did it feel? Certainly strange. Somehow I felt a bit lost in my planning as travelling speed would increase now. We would need to make decisions of where to go next.  During the past 2 months we only planned the coming 2-3 days ahead, which usually did not mean more than 150 or 200km. A reasonable planning. A new adventure is going to start right now.

And maybe a last comment about our bikes and the equipment. We read a lot of blogs and comments before we started our trip but did not really find a sufficient answer about which bike to use for the Carretera Austrral. Based on our experiences and based on what other people said I think we took the right choice with our 29er front suspended mountain bikes. The Carretera Austral still consists mostly of gravel roads and a front suspension is a real plus. It’s better to import front panniers and racks as even in Santiago we were not able to get such specific equipment. Same for the rear panniers. We bought some real water proof Vaude and Ortlieb bags in Germany and did not regret our choice. It’s indeed very hard or very expensive to get them in Santiago. The Argentinian neighbour did not seem to be better in that term as other cyclists told us.

Personally I believe it’s better to have front to act as a counter weight to the rear panniers. Of course we were sometimes short of space with our rear panniers only and the bike racks had a weight limitation of 25kg. Still, it was sufficient for the Carretera Austral if you don’t mind cycling 1 or 2 weeks in the same clothes. My suggestion: Merino wool, never smells. And to be fair, my shorts looked the same after a 6 or 7 hours cycling day on a dusty, sometimes muddy, gravel road, washed or unwashed.

There is not really a problem of water or food on the Carretera Austral. Every 50-100km we found a mini mercado with at least some basic ingredients for an evening dinner. Water is usually everywhere along the road: waterfalls, fresh springs, glacier rivers and tastes delicious. No need to get loaded with bottled water in Chile.

And that’s about it. Next stories will follow without the bike.

2 thoughts on “THE FINAL COUNTDOWN”